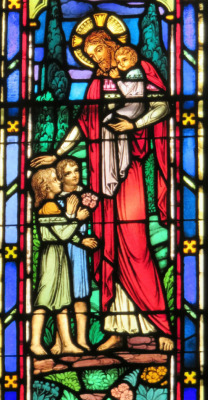 Founded in 1852, First Presbyterian Church of Bel Air, Maryland was established with nine charter members. All had strong religious convictions and were well-versed in Presbyterianism as they transferred memberships from other Presbyterian churches. Among the charter members was Sophia McHenry, daughter-in-law of James McHenry who was the Secretary of War under President George Washington and the namesake of Fort McHenry. The original Greek Revival church structure was built on East Pennsylvania Avenue and still stands today.

By 1881, the building was too small for the growing congregation. A new site was acquired for the construction of a new church where it stands today at the corner of Main Street and Broadway in downtown Bel Air. The cornerstone of the building was laid on September 7, 1881. In March 1936, fire engulfed the building, destroying all but the peaks of the four stone walls. The church was rebuilt in April 1937 according to the original design and was re-dedicated just 13 months after the fire.

In 1960, the interior of the church was reoriented to increase seating capacity and a new pipe organ and bell were installed. The Education Building, which lies directly behind the church, was completed in 1967. In December 1995, the manse was named Shreffler House after a former Pastor and was dedicated as a shelter to provide temporary housing to families in need during a transitional period in their lives. The church celebrated it's 150th anniversary in 2002. The Legacy of Faith building was completed in 2004 and provides a new fellowship hall as well as meeting spaces, classrooms, music rooms and staff offices. A Sanctuary remodel was completed in October 2012. First Presbyterian Church is a member church of the Baltimore Presbytery and the Presbyterian Church (USA).

FPC has a history of very dedicated and long-serving pastors, three of whom have served for over 24 years. The congregation has a deep commitment to and a long history of excellent Christian education programs for people of all ages. The church provides many fellowship opportunities for members to socialize, including the popular First Cafe with coffee and snacks between services. The church supports numerous missions to help those in need.

At FPC, you will find a friendly, caring and dedicated congregation which is truly Growing in Christ's Love, Open to All, and Dedicated to Service. We invite you to join us and be part of our future.